Despite the popular opinion that most game-to-film adaptations get their source material wrong to the point of embarrassment, I have an unabashed appreciation of gaming movies, which I fully intend to cover in great detail at some point. (YES I feel that you need a 2,500 word breakdown analysis on how Street Fighter is unjustly rated on IMDB). However, l simply felt that there were too many lists about them. So right now I'd much rather talk about another sort of gaming movie - movies about gamers themselves. There are actually plenty, despite some being obscure and tiny, foreign, or hidden deep within the recesses of the 80's and 90’s. Today we take a look at 5.

The Wizard (1989) – A true definition of an “80’s gem”, The Wizard is a heartwarming tale about sibling bonds, and a kid that’s an absolute genius at playing video games. After PTSD ravaged little Jimmy is put in a mental institution (the 80’s were dark weren’t they?), his brother Corey (Fred Savage) breaks him out and they make their way to California, meeting cool girl Haley (Jenny Lewis) along the way. They discover Jimmy is an amazing gamer and want to help him win the Video Armageddon gaming competition (which has a prize of $50,000), because they feel that will keep him from being returned to the mental institution. Meanwhile, Jimmy and Corey’s parents have hired a bounty hunter to track them down (because of course they have), and from there it’s a cat and mouse chase all the way to Video Armageddon. The movie is notable for its exuberant array of Nintendo references and was the first introduction to Super Mario Bros. 3 witnessed in North America. If all of that doesn’t sell you, Christian Slater is in it too – he plays Jimmy and Corey’s older brother Nick. Maybe I’m in some weird minority that can easily be persuaded to watch any movie if Christian Slater’s in it, but I'm just going to pretend I'm not because have you seen Christian Slater? 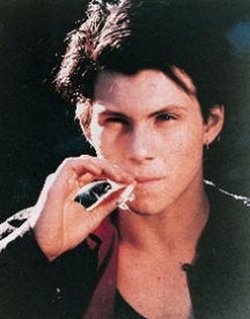 Help me. (this is from Heathers btw. Great movie also)

Brainscan (1994) – If you are in the mood for semi-cheesy early 90’s horror, GET EXCITED. Giving off warped Death Note vibes, Brainscan involves teenager depressed Michael (Edward Furlong), who loves horror movies and gaming. He receives a super immersive virtual reality horror game called Brainscan, and during his first play ends up killing a stranger and cutting off a foot. No big deal, right? You’ve probably modded worse, let’s be honest. But, twist – the next day Michael finds a foot in his fridge. It was all real! Michael thinks, "oh shit".  But it gets worse. Because then a flaming haired ghoul creature named Trickster rises from the Brainscan disc and forces him to keep playing the game and committing crime, with some pretty interesting twists and consequences along the way. Brainscan is self-aware enough to know exactly the type of ridiculous it's working with, sprinkling several Trickster one-liners throughout; all while maintaining an atmosphere of intensity and paranoia. It's tricky to pull off, but always commendable when it works. The CGI and tech is outdated, but only adds to the 90's charm, as does the moody, menacing score. Here’s a screenshot I’d like you all to see:

Tell me you don't want to watch this.

Gamer (2009) – Sadly, this was an absolute bomb at the box office, but who would’ve guessed, when it stars 3-yrs-post-300 Gerard Butler? It truly is a shame, because this movie really delivers on explosions, ass-kicking, and wacky plot points. Gamer is about a guy named Castle (Michael C. Hall) who, in 2034, creates technology that allows users to control other human beings. He creates a game called Society based off this technology, allowing people to use other people as their avatars. (The “avatars” are paid. Don’t worry, they’re not slaves. That would be silly). Since apparently this guy isn’t satisfied with being a multi-billionaire and literally the richest man in the world, he then creates Slayers, which is a first-person shooter using death-row inmates and real weapons in a specialized arena. The Slayers “avatars” play on the promise that if they survive 30 matches they’ll be free, but of course no one has hit that mark yet. No one is as close as Kable (Gerard) though, who’s being controlled by rich-kid Simon (Logan Lerman). At 27 matches, dude must be exhausted. Anywho, Castle grows increasingly upset Kable is doing so well, so he sics Hackman (Terry Crews) on him. (You excited yet?) Then there’s a resistance called Humanz, who wants to take Castle down. And then there’s a revenge plot, among also other things I can’t talk about because if I do… I will give away the other insane bits. Honestly, there’s a lot. Things get so intense that you might have to break out the Gamer Goo for your forehead. Just know it’s one of the most thrilling roller coasters you’re ever gonna be on, friend. 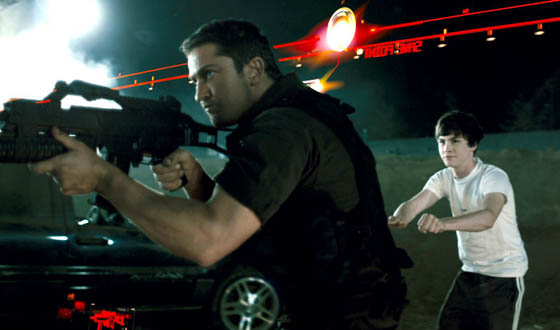 Is that testosterone I smell?

The Last Starfighter (1984) – This one’s an 80’s classic, but movies this fun always have huge re-watchability factor. The plot is essentially every gamers dream (or nightmare – depends on who you are I guess). Teenager Alex (Lance Guest) finally achieves a high score on his favorite arcade game, Starfighter. Afterwards, he meets Starfighter’s game designer Centauri (Robert Preston), who informs him that Starfighter was actually conceived as a training ground for recruiting real gamers to help fight a current war that’s happening in space. Centauri abducts Alex in his car (which is actually a spaceship) and off they fly to a distant alien planet, where a teenager is then allowed to pilot real weaponized spacecraft in an intergalactic war simply because of his exceptional gaming skills. If that’s not a fantasy, I don’t know what is. But that’s what makes it amazing.  After Star Wars, lots of intergalactic war movies were made in the 80’s, but this one stands out as one of the best. 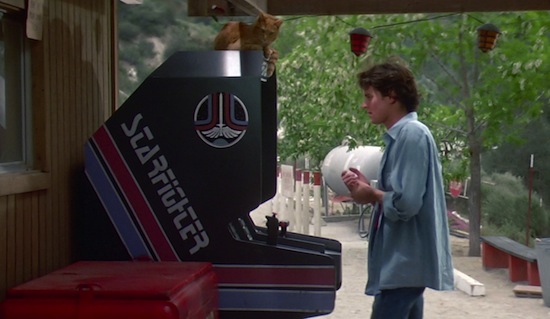 Hope you like it. Soon it'll be your life.

Ben X (2007) – Diving into the deeper psyche of a gamer, Dutch film Ben X tells the story of an Asperger’s ridden teen who is continually bullied, but then finds solace in online fantasy MMORPG ArchLord. Ben X is unique in that it uses a literal game anyone can play in real life to demonstrate its point. In the game, Ben becomes friends with player Scarlite, who helps guide him through his difficult experiences and later plot a way to get revenge on his relentless tormentors. Definitely a bleak sounding film, but the message is an important one, and definitely worth the watch for anyone who has seen the cruelty that society can bestow. I’m avoiding spoilers so I can’t say much else about the plot-line, but I will say this: where it goes is not where you’d expect. And that’s always very good news.

I feel assaulted by this bare back.

Hey, I’m not done yet, so don’t @ us with the ones I missed. I’ll be back with another list soon enough. For now, all I can hope is that I’ve introduced a few movies to you that you didn’t know about before. Whip out the Gamer Goo if you’re sweaty, and get ready to tune out and dive in. I mean it is Friday, after all.